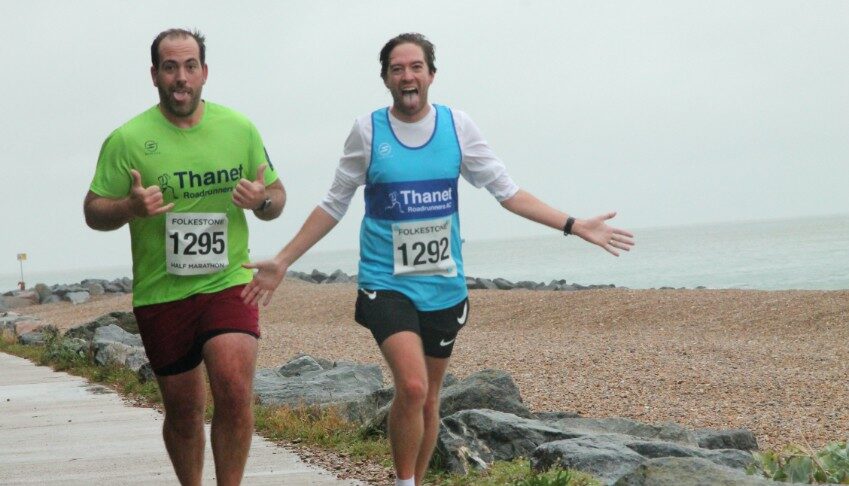 With races slowly returning, last weekend saw the a number of our TRACies take on the Folkestone Rotary Half Marathon. It was one of those events where you are sat in your car at the start of the race and questioned why you were doing it. The weather had turned horrible with strong winds and rain whilst the heat of the summer was now a distant memory. However, it was also one of those races that as soon as you started, you knew exactly why you were there to run.

The start of the race was under strict new COVID-19 measures that also ensured social distancing requirements were met and meant that all runners were given a designated start time spread over a two hour period. Whilst this need make sure that this was a very safe and well organised event, it did take away some of the racing element with just groups of 12 going off every few minutes. With the same token, if it is this or no racing at all, then I am glad that there is a way in which we can still all safely take part in an organised race again.

The course itself is mainly flat and fast and starts on the Lees before heading down a steep hill onto the Road of Remembrance and through the coastal park. The route is then an out and back to Hythe along the promenade before heading back up the Remembrance Hill and finishing back up the top by the Lees. The weather conditions obviously made things a little more challenging but it didn’t seem to have an effect on the runners. A special mention also to the Nice Work Team, the marshals and the volunteers on the day (including our own Terry Brightwell) that would have spent a significant amount of time in those conditions. Thank you to each and everyone one of them that made this event possible.

We had eight runners representing the Thanet Roadrunners which featured plenty of great performances, personal bests and podium finishes in age categories. Andy Stevens was the first of our TRACies to finish in a great time of 1:23:41. Andy also finished 2nd in the V45 Male category. Phil Stevens, off the back of some fantastic and consistent training was next to finish in 1:30:27 and also finishing 2nd in his age category.

The evergreen and inspiring Dave Winch finished in a great time of 1:40:51 and claimed 1st place in his category. He was closely followed by Steve Suttle who finished in a time of 1:41:34 and claimed 3rd place in his age category. Both Max Hubbard and Daniel Otley were running as part of their final preparations for the Virtual London Marathon that was due to take place the next weekend. They both finished in 1:51:15 which was also a huge 7 minute personal best for Dan which was a testament to all the hard work he has been putting into training.

A big well done also to our two ladies that were also representing the club in Folkestone. Jacqui Brazil, smiling the whole way around, was our first female runner to finish in a fantastic time of 2:09:23 and also claimed 2nd place in her age category. She was closely followed by Linda Fox who finished 1st in her age category in a great time of 2:18:13.

A huge well done to all of our runners.

The full results can be found here