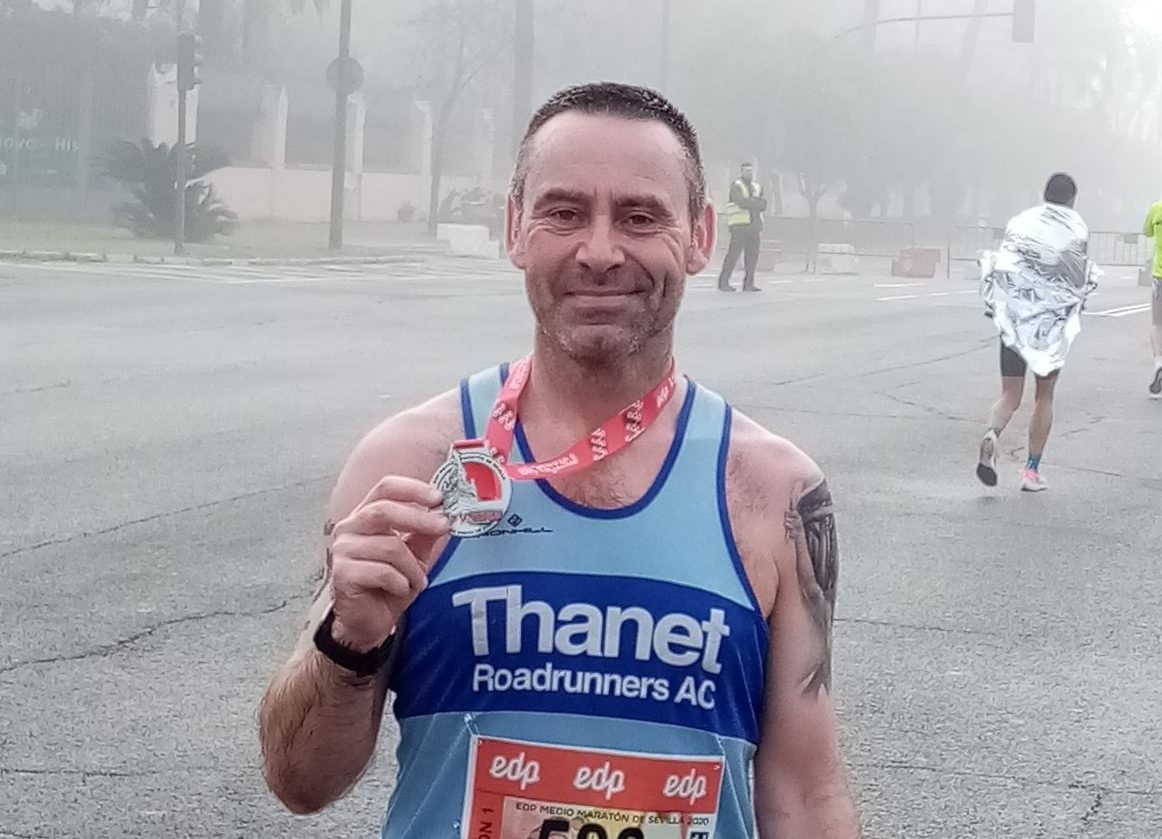 After running some races in other Spanish cities I found myself entering the Seville Half Marathon.  2020 marked the 25th anniversary of the race and I quite liked the sound of a pancake-flat course mixed in with a little winter sunshine.

However, the torrential rain on the day I arrived wasn’t what I expected and the hotel receptionist told me it was “quite unusual”.

Come race day the weather was even more bizarre.  Constantly going from thick fog to brilliant sunshine back to thick fog and then sunshine again.  All very odd but cool temperatures and hardly any wind was to be welcomed even though the runners struggled to see some of the historic landmarks out on the course.

A late night the previous night watching FC Seville resulted in a stonking headache on the morning of the race.  Unfortunately not alcohol related.  A fairly laboured warm up convinced me to ditch the race plan and go out steady for the first 5 miles and then take it from there.

The race has the reputation of being among the fastest courses in Spain and the starting gun gave further evidence of that as the Pen I was in all stormed off and I was across the line in seconds – despite the large 10,000 field.  I went off steady at 6.40 pace and tried to make out some of the landmarks through the cloak of fog.

The race itself takes you alongside the river for the first 5k, across a bridge and then back the other side of the river to the half way point.  From there you repeat the bit you have already done and are then directed into the city centre at about the 9 mile mark for what was the best and most scenic bit of the course.  The support was quite sparse in areas but lots of people in the city centre gave the runners some very vocal support.

I hit 5 miles in 33 minutes and decided to start winding up the pace and see how I felt at the 8 mile mark.  After 3 miles under 6.30 pace I was starting to feel  better and decided to really push on for the last 5 miles and see how many places I could move up.  The last 5 miles turned into a progression run for me and the pace increased from 6.20 to 6.02 with a final sprint finish at just over 5.30 pace which gave me a 1.24 finish and a big negative split.  My 5k split times told me I had gained 120 places in the last section of the race.

I was pleased I listened to what my body was telling me before the race.  I have ignored it before and ended up in all sorts of problems during races. Moving through the gears and overtaking loads of people gave me a real boost and I really enjoyed the race and was really comfortable throughout.

Overall a great race and a great city to spend a long weekend in.