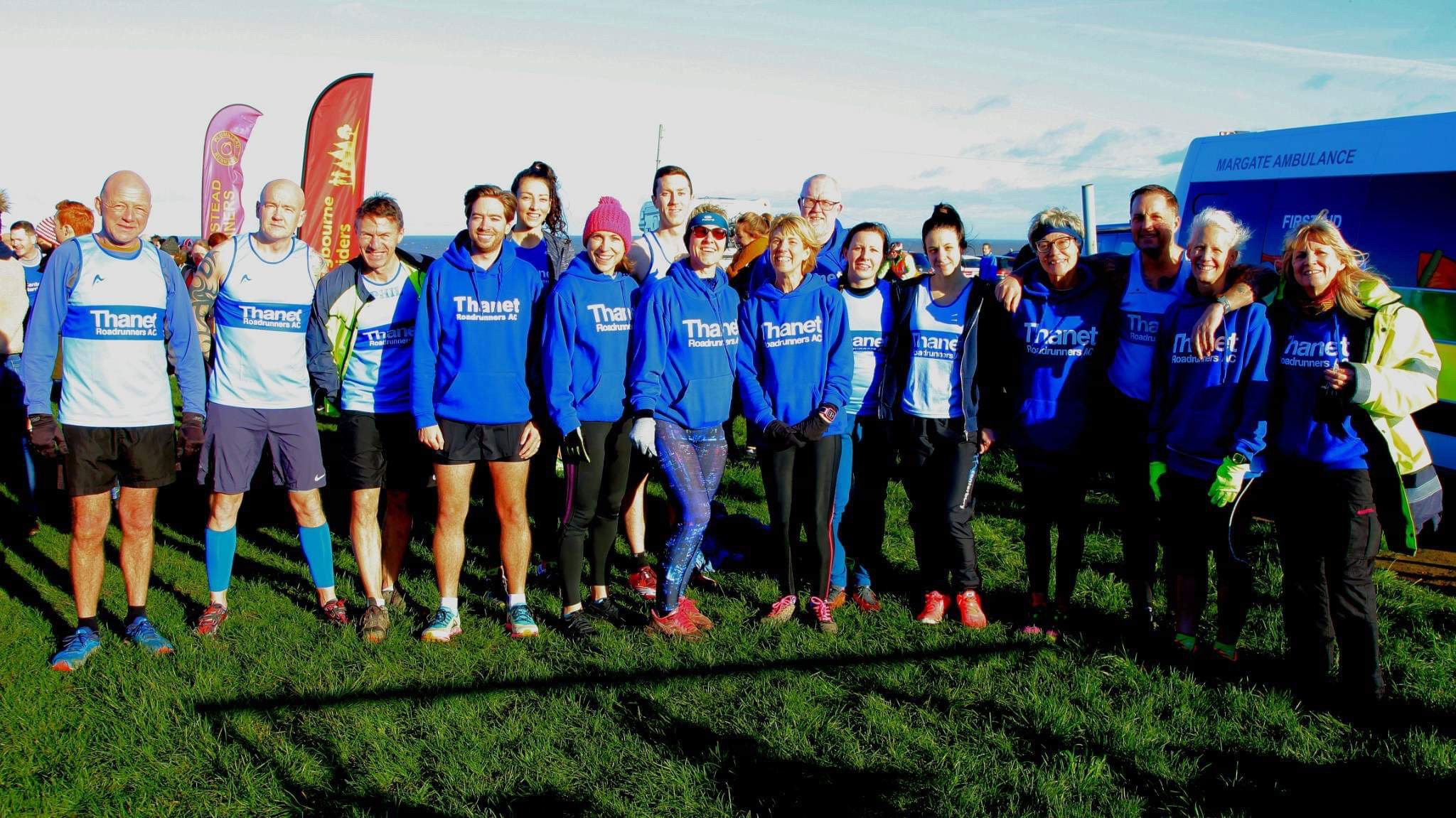 Race five in the Kent Fitness League Cross Country was held at our very own Minnis Bay. Not only is this a great course that gives runners a couple of unique obstacles to negotiate but it is also the event that the Thanet Roadrunners host.

The Minnis Bay course consists of one large lap and is one of the longer races in the series at around 6 miles / 10K. Starting on the green just outside the Minnis, the race route starts with a straight 4K that runs parallel to the sea along a very muddy coastal trail. If this wasn’t tricky enough, runners were also treated to a fairly brutal head wind. Given that this course is relatively exposed compared to others in the league which made the early stages of this race really tough. At the 4K marker you are sent back inland across yet more muddy tracks until reach a raised area that runs alongside the railway line. On this section the ground was noticeably firmer and the wind was now on your back which enabled runners to pick up the pace as they looped back. However, at 7k the course drops back down to introduce five muddy dykes (four small and one monster). Jump, climb, crawl or dive in, the choice was up to you, either way you had to get through them before heading back up to the relative safety of higher ground. As the race reaches its climax, over the last kilometre runners have three short sharp humps to go up and over before a sprint finish back across the green.

Given the nature of the course, plenty of runners love it and there are also plenty that loath it which is mainly due to the dreaded dykes! That said, other than the wind, racing conditions were great and we had a record number of finishers with a whopping 447!

We also want to say a massive thank you to our excellent marshals and volunteers. Without their support this race would not be possible and for that we are incredibly grateful.

With this being our home leg of the Kent Fitness League, it was important for our Roadrunners to put in good performances. With a total of 21 runners representing our club at this event, they all did fantastically well.

Jack Bradley continues to go from strength to strength with another incredible race and an impressive 4th place finish overall. Chris Brenchley also had a great run with a 17th place finish overall and his highest finish of the season so far. Capping off a fine performance for our men’s team was Craig L’fakir with his first run in Thanet Roadrunners colours and a very good 87th place finish.

A number of our men also managed their highest finishes so far this season at this race including Max Hubbard, Paul Brackenborough, Steve Forshaw, Steve Morgan and Simon Burton. Well done guys.

A special mention to John Dickerson who was feeling extra generous and decided to give everyone a 2 minute head start. Despite his late arrival, John still managed to battle his way through the field and finish 124th overall.

For our ladies team, it was Claire Morgan who was the first to finish as the 19th fastest female (154th overall) which was also her highest finish of the season. Jasmine Lasslett was our second fastest female finishing 33rd (194th overall) in her first race of this season. Nikki Boyes capped off a great performance from our ladies team finishing in 49th (251st overall) which was also her highest finishing position of the season.

There was also a number of our ladies who ran particularly well with their highest finishing positions of the season so far including Janet Morgan, Sarah Harmes and Karen Moyes. Our ladies team also featured a return back to racing from Claire Greenaway. Well done ladies and welcome back Claire.

We also had a number of other runners making their debut in the cross country this season with great runs was Royston Robertson, Dick Bailey and Kelly Noble. We hope to see you representing the club again soon.The next and final race of this seasons Kent Fitness League is at Blean Woods in Canterbury on 9th February.

We have had a total of 30 different TRACies take part so far and it’s not too late to get involved. If you wanted to join us in Canterbury and help the club finish strong, please get in touch.