Richmond Half and Marathon Race Report

On a pleasantly warm and sunny weekend saw various Thanet Roadrunners make the trip to a very nice part of South West London, with some making a bit of a weekend of it arriving on the Saturday and preparing with various pasta-related dinners; carb loading being key rather than loading up on wine… Others had a slightly less relaxed start to race day with a very early start to drive up on the Sunday morning.

The Marathon and Half Marathon were both held on the Sunday morning but with a 10K race and kids races on the Saturday the Richmond Run Fest was a weekend of running fun, all focused around Kew Gardens and the Old Deer Park at Richmond; not bad locations to run around I have to say! As the sun shone and the temperature rose quickly on the Saturday afternoon it was clear that race day for those TRAC tourists was going to be a hot one and sun screen would be required! 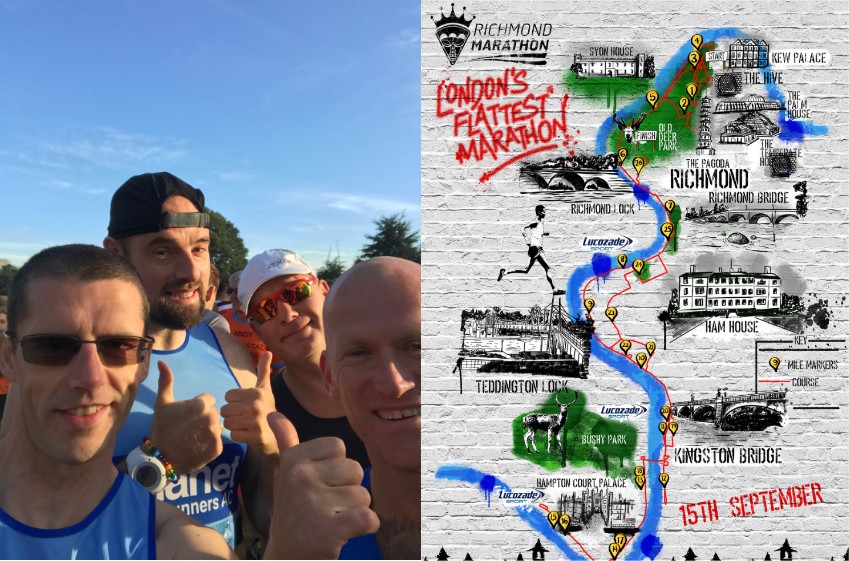 Race start was 08:00 for the Marathon so rather early, meaning those staying in hotels had to forage for breakfast rather than eating in their hotel! However, the early start did mean that hopefully the race would be over and done with before the worst of the heat was upon us if the weather forecast was correct. The Half Marathon was due to start at a slightly more civilised 08:55 giving anyone running the Half a bit more time to prepare.

The race start was Kew Gardens and what a great place to start a Marathon, certainly beats most city-based races for the general aesthetics of the race start! As the team TRAC all gathered and dropped bags off it was still a bit on the chilly side and we were all certainly ready for the race to start as we waited in our pens, bumping into a few familiar faces from different clubs.

The race got off to a slightly strange and perhaps underwhelming start, without any fanfare, the starter simply said “GO” and off we went. The first three miles of the race wound around the tracks around Kew Gardens, a really great experience to be able to race around such a pretty place although as is usual for the start of a race most of us probably went out with ‘enthusiasm’ and perhaps took less notice of the surroundings than if we were having a more relaxed run! Just before we left Kew Gardens we went back past the start area where all the Half Marathon runners were gathering ready for the start of their race so were met with lots of enthusiastic fellow runners which was good to get a bit more of a push along; the exit from Kew Gardens was a little narrow on a sharp corner and that combined with an unmarked kerb very nearly led to a test of gravity…

After leaving Kew Gardens we quickly made our way onto the Thames Path which we would spend most of the rest of the race going back and forth along; to be fair it is really rather picturesque to run along the Thames but the fine gravel that covers much of the path did mean that we couldn’t get as much grip as you would on a tarmac path, city marathon. As you can imagine running along the Thames Path, the route was mostly flat with only a few slight bumps here and there, the race organisers did advertise the race as ‘flat’ and it would be hard to argue with this.

The race route continued along the Thames Path, skirting past Ham and then past Teddington Locks at about mile 8 or 9; a whole variety of passers-by were out around the Thames with a lot of people looking like they were enjoying rowing on the river as we pounded past them on the Path. Of course, racing on the Thames Path brings some challenges as it can’t be reserved for a race and at times the racers had to negotiate past other runners, cyclists and walkers and there were a few very near misses with dogs suddenly finding themselves cut off from their owner… Of course, most people out and about just looked on slightly bemused at these ‘crazy’ runners charging down the Thames Path.

A few of team TRAC had brought family members along to act as cheerleaders and unofficial photographers and they were a very welcome sight for us as they brought a little more bounce into our steps along the way!

On the more open parts of the Thames Path we could feel the rising sun bringing the temperature up with it as the morning went on; certainly, it was going to be very hot by late morning which would bring further challenges to those racing. As the race went on, Hampton Court Palace was a very welcome sight, this was the ‘turn around point’ at about mile 15 and another great place to be able to run around; not the normal destination for a race!

As the temperature was rising it was clear that anyone racing would need to be taking on plenty of water and the water stations seemed to be well stocked and at most of the stations the marshals were handing out cups and bottles efficiently. Along with water, about every 8 miles or so there was also Lucozade Sport; normally I prefer gels but thought I’d give it a go, to be honest, I probably wouldn’t do that again as it was fine for the first station, but having Lucozade sloshing around in my stomach didn’t feel all that good after the next station, just a bit too much liquid!

After Hampton Court we wound back onto the Thames Path and headed back towards the finish, although knowing we still had 11 miles to race it was still a fair amount to go. As the race was running on parallel tracks it was good to see a few fellow TRAC racers in the opposite direction and we could give a mutual shout out to each other, again a well needed boost to the system!

The race briefly left the Thames Path and went into the edge of Kingston at about mile 18 or 19 which was nice for a bit of variety and especially to get onto some tarmac for a while, the grip on this felt very good and allowed for a bit of a smoother run than on the Thames Path; however Kingston felt fairly quiet so there was a bit of a lacking of support to boost the mood a touch.

Again, we re-joined the Thames Path, retracing our route back around Ham and then into a short circuit around Buchleuch Gardens and back to the Path again! However, now we were really on the home stretch with just over a mile to go by the Thames, closing on the finish…

The finish was in the Old Deer Park so after running for 26 miles on paths we were brought into the park and onto grass for the last 0.2 miles; tired legs were spurred on by vocal crowds and the finish line could be seen. A ‘quick’ sprint to the finish and it was all over, the look of relief on the faces of most of the racers was clear, it was done and now time to stop and relax!

As is usual for the end of a big race (979 finishers for the Marathon and 3146 finishers for the Half Marathon) it was busy in the finish area and there was a bit of queuing to get T-shirts etc., and get out to meet up with friends and family but this was all done quite quickly. The biggest queue was for the free beer as one of the sponsors was Fullers brewery, all athletes need to rehydrate after a race of course!

Overall, this was a good event, I doubt that there will be many races in a major city that have a much more picturesque route. The race route is definitely flat, however the nature of the Thames Path means that much of it is less grippy than tarmac so can definitely mean more effort is needed to get the same speed as on tarmac and where the path narrows and twists and turns at times can create a few brief bottle necks and areas that you have to slow down for a little. There were a few unmarked hazards underfoot and narrow paths, combined with tired legs, led to a few tumbles and falls, with gravity well and truly tested by three TRAC runners during the race!

There were many good points of the race, the picturesque surroundings, running around Kew Gardens and Hampton Court and finishing in the Old Deer Park were all highlights of the day, however, there were a few areas that could do with consideration that would make the race even better. As an issue that many races suffer from, the race organisers ran out of T-shirts in various sizes quite early on for the Marathon finishers, probably because the same T-shirts were given out to both Marathon and Half Marathon runners so those racing the Marathon at an equivalent pace would arrive at the finish after the Half Marathon runners. However, what was my biggest problem was at mile 23 the Marathon route joined up with the Half Marathon route (mile 10 in their case) which sounds like a good idea to bring more runners together, create more of an atmosphere etc., however this was definitely not a good thing… The timing of the respective starts meant that the Marathon runners were running at a much quicker pace (about 2.5 min/mile pace differential) than the Half Marathon runners on the route at the same time. This caused a lot of congestion and meant that Marathon runners were having to constantly weave and dodge around, running in the road at times to get through as there was not enough room on the foot path. I was constantly shouting “coming through on your right”, “coming through on your left” to try to clear a path through, even in the run to the finish line. Whilst the idea of the two races joing together is nice in principle, the implementation was dangerous to runners in both races and could easily ruin someone’s race if they get stuck behind much slower racers.

On what was a day that TRAC was very well represented, all the runners that were there (11 for the Marathon and 1 for the Half) enjoyed themselves and achieved great times (including a PB for me!) on what was a tough day of racing in the sunshine!