When you think of a nice day at the seaside most people think of sun, sand and perhaps some ice cream or fish and chips. Well, the runners taking part in the 2019 Harbour Wallbanger certainly got the first two and probably earned the latter with some good hard running on the beach.

The Harbour Wallbanger is a very popular race (it sold out again this year) organised by Thanet Roadrunners. It is a 7km race on the beach from Broadstairs harbour to Ramsgate and back again taking in some of Thanet’s best sandy beaches and was ably organised once again by Race Director Spencer Hoult and a team of volunteers from Thanet Roadrunners. As usual part of the entry fee was donated to charity, with this year’s charity being Broadstairs Surf Lifesaving Club.

The weather was glorious, there were blue skies and thesun was shining; a warm day greeted the near 300 runners lining up on Viking Bay at Broadstairs on Saturday morning waiting for the start of the race. As usual there was a great mix of competitive runners and those that were out to enjoy a run along the beach. As the race got underway it was clear that the front runners were going to make a great race of the day with a cracking pace being set, even with the challenge of running on the soft sand.

The good weather brought out plenty of tourists and onlookers to Broadstairs who cheered on the runners as they worked around the beaches towards Ramsgate and back again. 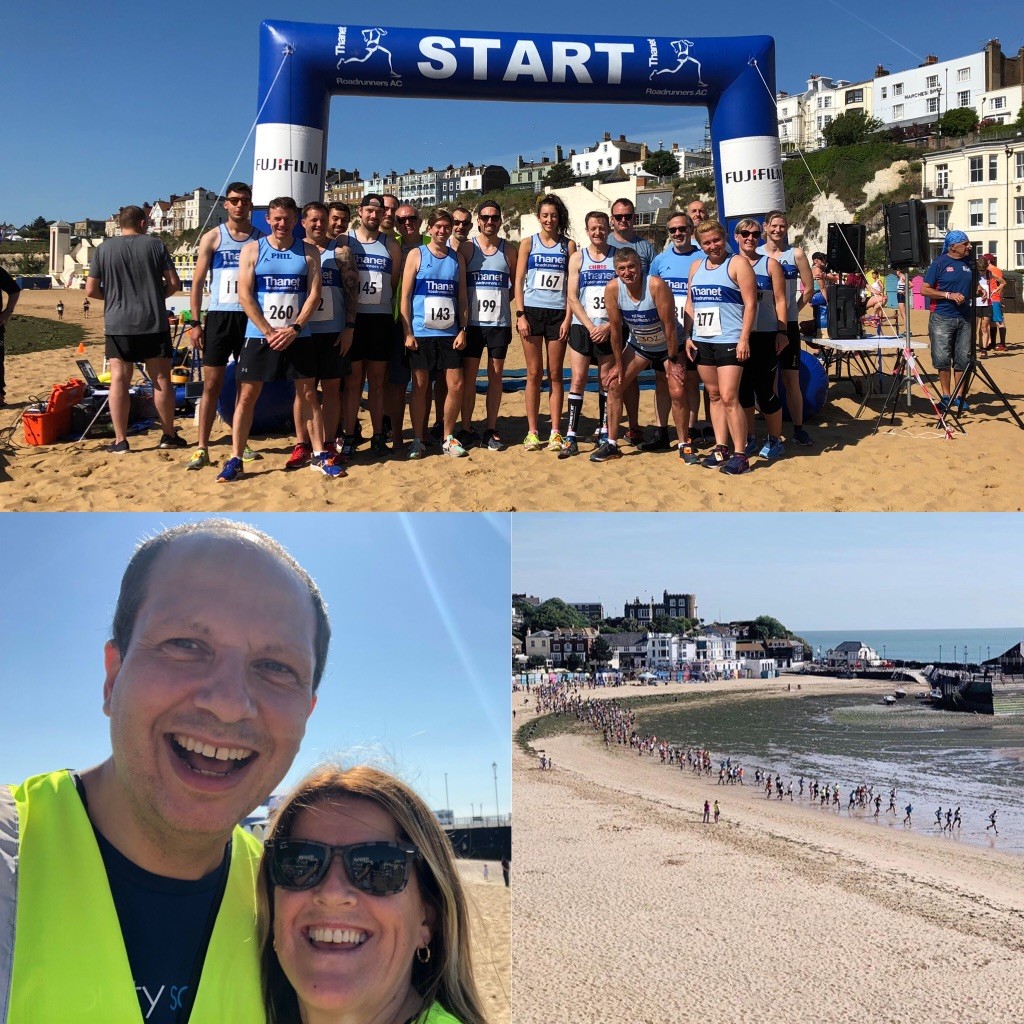 The race started and finished on the sand at Viking Bay which obviously adds to the challenge of trying to run fast. As those that live in the Thanet area will realise, the tides can shift the sand around, and as the runners raced past Louisa Bay and out towards Dumpton Gap they came across large parts of the beach that had exposed limestone and flinty rocks to work around; just to add to the fun the tides had washed in a covering of slippery seaweed. The race would be more fun or tricky depending on your perspective with an extra element of damp feet and ‘multi terrain’ to challenge the runners. After reaching the wall at Ramsgate the runners turned for the second half of the race back towards Broadstairs which of course meant negotiating the tricky part again, perhaps a bit tougher on the way back on tired legs. Once clear it was a straight race back towards Viking Bay on the sand.

The race finished at a pace with Ted Mockett from Ranelagh/St. Mary’s Richmond pulling through as first placed male in 28:17 (35 seconds ahead of 2nd place) and Liz Weeks from Tonbridge finishing as first placed female in 31:09 (over 6 minutes ahead of 2ndplace). After the first runner came through there were a fair few sprints towards the finish line as the runners tried to grab a few seconds off their times and perhaps move up an extra place at the finish line.

A great overall team effort from Thanet Roadrunners taking both the men’s and ladies team prizes.

The results for the Thanet Roadrunners taking part are below:

Official photos taken at the race can be viewed and purchased from David Carr Photography.

We hope that everyone taking part enjoyed their run in the sunshine and trip to the seaside, hope to see you again next year.