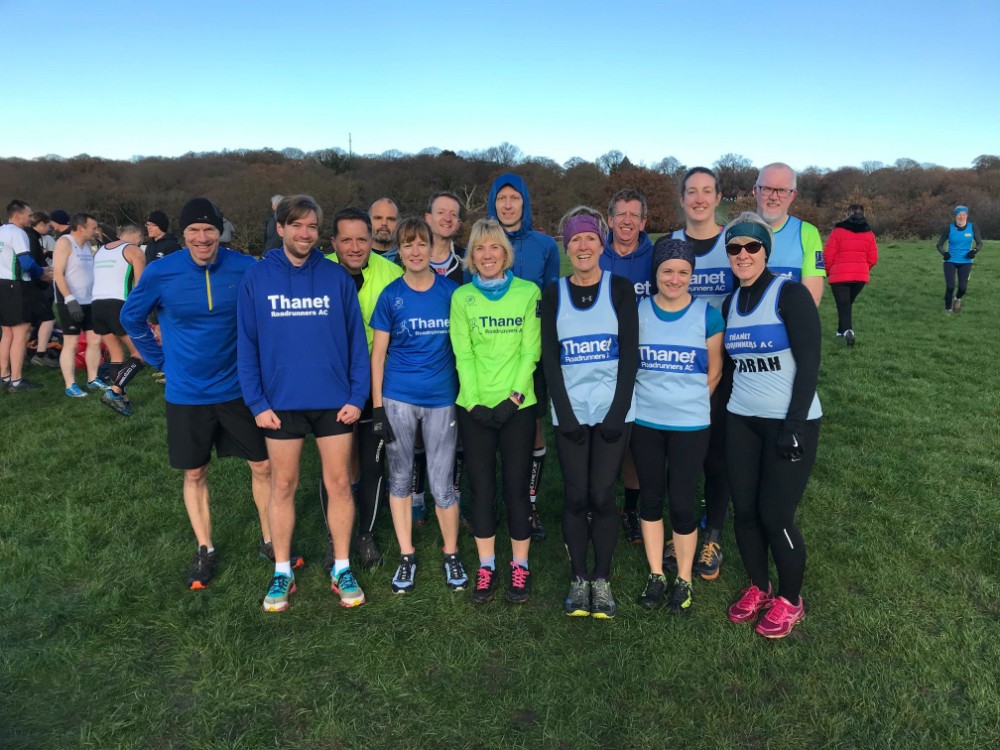 After a couple of weeks break, it was time for the next race in the Kent Fitness League Cross Country series. This week was the third race and saw us head out to Oxleas Wood in Eltham.

With a bit of a date clash with our own Alan Green Memorial 10 Mile Race we just about managed to field a full-strength team. This weeks squad also welcomed a couple of new faces for this season which included Paul Brackenborough, Pete Heath, Sarah Harmes and Kylie Pettit as well as plenty of the usual suspects.

Yet again we were treated to clear blue skies but there was more of a nip in the air this time around. There has also been a lot of rain over the past few days with the ground particularly soft and wet underfoot.

The cross country at Oxleas Wood is notoriously difficult with plenty of hills and muddy trails littered with tree stumps and overhanging branches. When you add to that the amount of rainfall we have had, 80% of the course has turned into a mud bath! Some of us were more at home than others at running through forests and quagmires at full steam, but we were all in this together.

The course itself consisted of one small loop of the main field followed by two larger loops that take in the woods to the East and West of the park. The first loop serves to help thin out the runners, especially as the course really narrows when you enter the woods and is pretty much single-file at certain points.

Once into the wooded sections of the race the ground really was thick with soft mud, leaves and tree branches. Each step was almost a leap of faith as to whether or not you remain upright. There were obstacles in the form of fallen trees to hurdle and plenty of inclines to keep things really interesting. By the time you are on to the second larger loop the fatigue from wading through the mud starts to set in. The course is now even more churned up and the mud deeper, but by this point you just have to dig deep and get the job done. As you come out of the woods for the final time and back into the daylight it is just one final sprint across the field on tired legs to the finish.

Our men’s captain Chris Brenchley finished in an impressive 18th position overall whilst John Dickerson also had a great run finishing 60th overall. Maria Skinner continued to run strong and was the 7th female runner to finish (96th overall). Our women’s Captain, Nikki Boyes, also had a great run and finished nearly 100 places higher than she did at Swanley.

This race was definitely the toughest one so far in this series with all of our runners giving it their all and finishing strong. All of our runners that ran at the previous race at Swanley, improved on their positions. It was another great all-round team performance. We are probably the smallest running club there but pound for pound we continue to punch above our weight.

Soon after finishing it was time to take part in Maria’s, now notorious, ‘warm down’ session where she leads a small group of us on a short run which usually involves plenty of hills!

Next up in the Kent Fitness League is Shorne Wood on 5th January 2020. Please get in touch if you want to get involved.