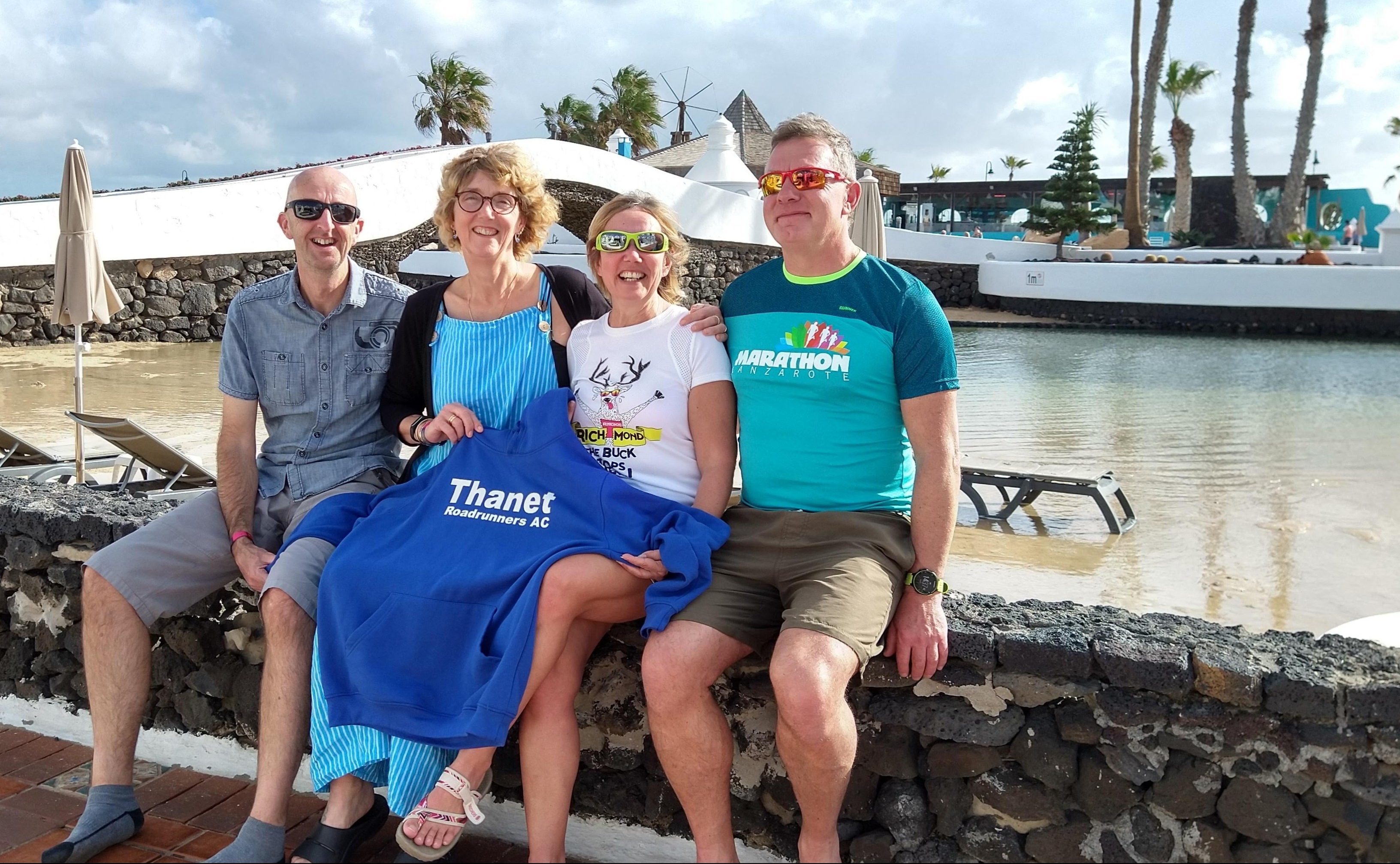 On Thursday 5th December four intrepid TRACies – Maryanne Aitken, Scot Haggarty and Pam & Michael Philpot – headed off to Lanzarote for the 2019 marathon. For Maryanne and Scot this was their fourth running of the event. For Pam and Michael it was their first.

The day of our arrival and the Friday gave us sunshine and showers and the usual strong winds – certainly conditions that living and running in Thanet prepared us for.

Pam and Michael were staying about 3km away from the start so they decided to jog to the expo to collect their numbers. Two drowned rats arrived but they soon dried out.

The Lanzarote Marathon is a relatively small event with – mostly – very slick, big city marathon organisation. They run a 5km Santa Run on the Friday, and 10km, Half Marathon and Marathon on the Saturday which makes it a very popular trip for running clubs as everyone can run and be part of the event.

At least 50% of the field is British or Irish, probably more, with large groups from running clubs. One club from Aldridge in the West Midlands turned up with more than 30 members this year and the 100 Marathon Club probably had around 50 members present.

Race day dawned sunny, although still cool for the start of the marathon at 8am. The marathon runs from Costa Teguise, south towards Arrecife, the main town on the island. There is a short section through the port area which is a bit industrial but once through there we ran through the town and then onto the coast path through beach resorts to the airport area. This is a rather flat and barren area but with the added interest of having planes landing and taking off directly above our heads!

Lanzarote seems to be a bit like Thanet at the moment – with roads and footpaths being dug up all over the place. This meant the route this year was amended with a very strange looping back section to make up distance as the route couldn’t run all the way to Puerto del Carmen.
The marathon starts in Costa Teguise, and the runners in the other events are variously bused to their start points. The Half starts at the turnaround point, and the 10km in Arrecife. 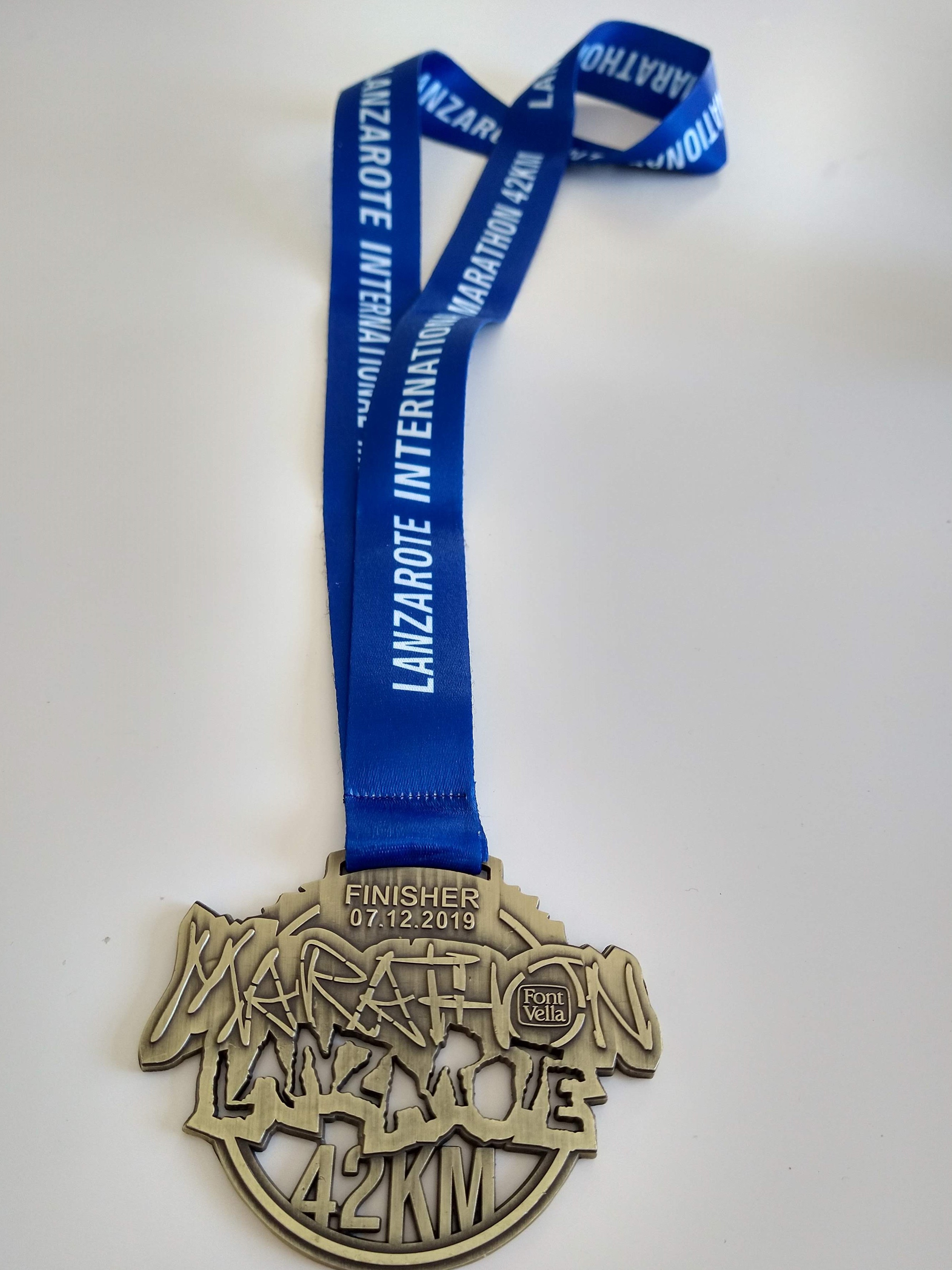 It turned into a warm day, but not as warm as previous years with the wind behind on the out leg and a headwind on the way back – nothing we’re not used to here in Thanet! The speedier runners (i.e. everyone but Maryanne) managed to avoid the short sharp shower that hit Arrecife but it was quite refreshing.
Scot and Pam finished almost together at 4 hours 13 or so. Michael unfortunately has been listed as a DNF in spite of crossing the finish line, getting his medal and a finish line photo! This will be resolved I am sure very soon. Maryanne staggered in at 5:30 (gun time) – better than expected.
The finish line area is extremely well organised with masses of food and drink (including free beer for those that finished before it ran out!) and plenty of seating so people can be sociable.

Then, once the race is over, the socialising takes place which is really what the trip is all about!

We would highly recommend Lanzarote Marathon as a race with a bit of winter sun thrown in – a four hour flight from the UK, and so easy.