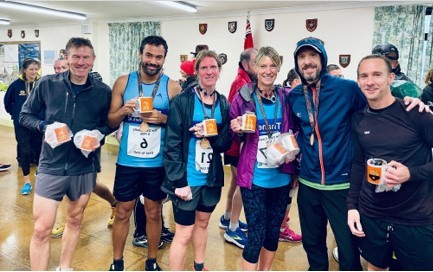 The Deal Castle 5 mile race was organised by Deal Tri and advertised as a circuit route, using
the seafront promenade, involving “a speedy out and back figure of eight, promising some
super pb’s if the weather is favourable”.

Unfortunately, the wet and windy November weather was not favourable and before
leaving the house, I had speculated whether there would be many people there considering
the awful weather conditions. My husband reckoned it would be busy as he commented
“runners are all mad anyway”. He was quite right (about the turn out that is, I won’t pass
comment on the craziness element). It was really great to see so many Traccies there as
well as familiar faces from other local clubs, and being at an event with so many people was
a great motivational factor for doing a Sunday run in unpleasant weather.

Out of the 14 Traccies that braved the weather for this event, Tim Kerr won my admiration
for best dressed runner with waterproof, leggings, hat and gloves. On meeting some of the
other Traccies, they reassured me that a vest / bare arms would be fine “as we would soon
warm up”. Right…. 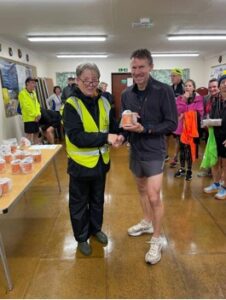 The course was indeed great, in terms of the flat run from Deal scout hut towards
Kingsdown, but the views were a bit obscured by the rain and hail that we ran into for the
first couple of miles. Initially I tried to avoid the puddles forming, but at several points, they
spanned most of the path, so I gave up on that and squelched through them. At Kingsdown,
the runners turn and run back towards Deal which gave me a nice chance to see and wave
to the speedy Traccies who were out in the lead – Lee Hardie, Jay Bailey, and Jo Kemp, all
running super fast and indeed finishing in the top 5 of the male/female groups.

For the second half of the race we enjoyed the wind pushing us along and ran past the start
line towards Deal pier, where we again turned and ran a final stretch against the wind again.
The whole team did brilliantly – mostly to turn up and run in the horrible weather, but there
were also some fantastic positions and age-group prizes. 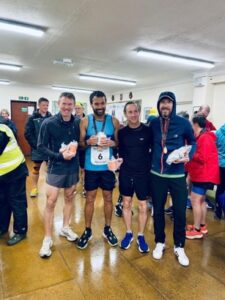 We really appreciated Deal Tri club for putting on this event and for the large number of
marshals who very kindly stood out in the wind and rain encouraging everyone along.

Thanks to Julie Williams for writing such a great race report and well done to all TRAC runners who ran so well in such “challenging” conditions !!