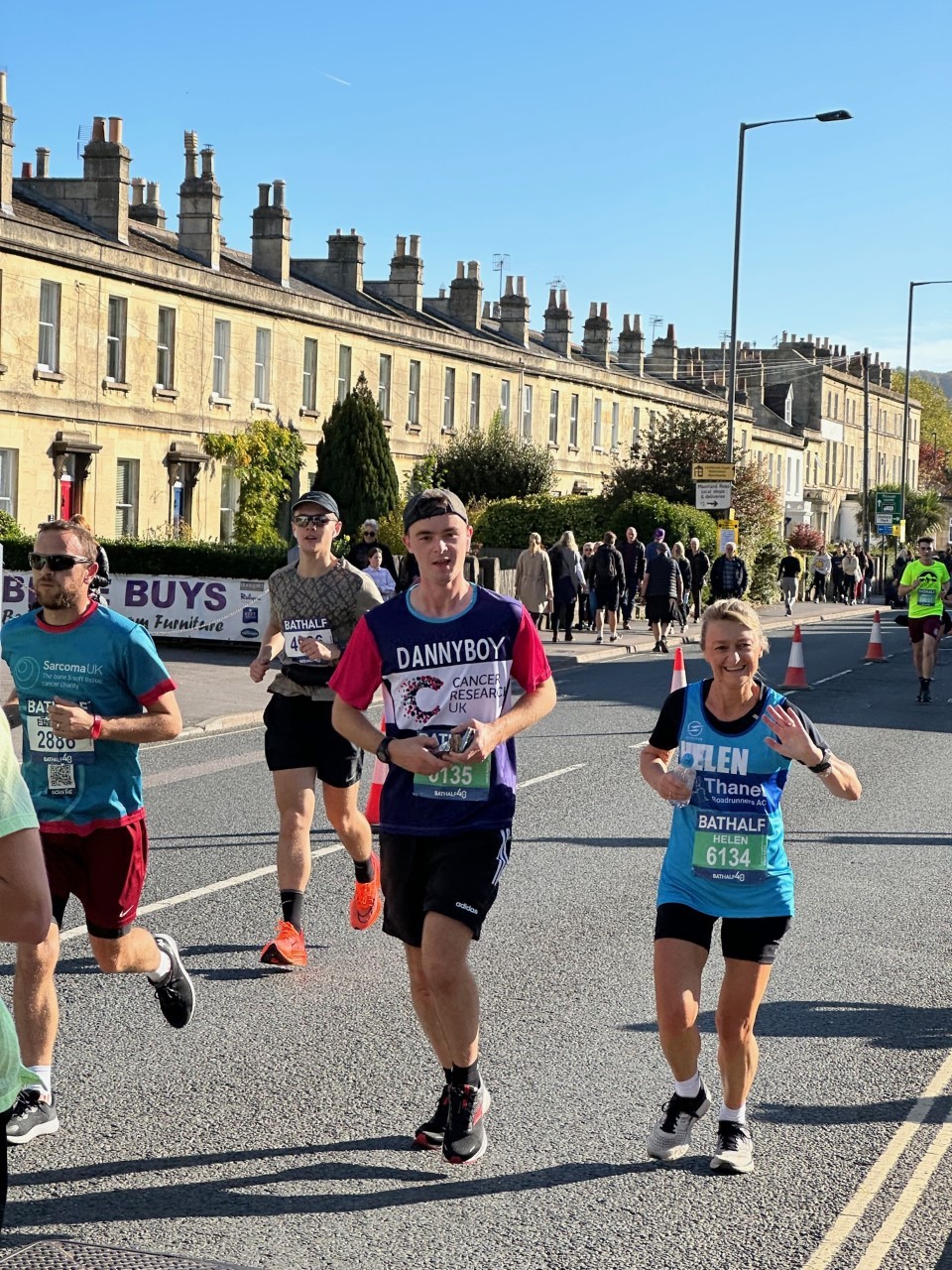 For a while now, I have fancied running the Bath half marathon.  I am not entirely sure where the original idea came from but it all came together when my son Dan (who is currently at Bath university) also expressed interest and we both signed up.  This was Dan’s first half marathon.

From the moment I woke up on the Sunday, it seemed a good day.  The rain that had been forecast was nowhere to be seen and the skies were blue and the sun shining. After consuming a hearty breakfast at the hotel, we made our way to the start line ready for our 10.40am start.  We had the rest of the family there as our support crew so there was no need to use the facilities at the runner’s village for bag drops etc – although I heard this was very well organised and efficient.

The Bath half marathon had been postponed on 4 previous occasions over the last 2 years due to Covid and local road closures so this race was a long time coming for many.  In addition, the route had been amended to make it flatter and to avoid some of those notorious hills in Bath.  There were 3 separate start times 20 minutes apart to accommodate the large number of runners.  We were in the second wave and we set off slightly ahead of schedule but in a very orderly and organised way.

The route started off with a loop to the East of the city taking in the classic Bath buildings close to the Royal Crescent and with an opportunity already for our family supporters to cheer us on.  My watch flipped out initially and our first 2 miles were slightly faster than planned with all of the excitement but we all calmed down by mile 3 when we were returning back to the centre and another opportunity to receive support from our faithful support crew.   From there the route looped West along the river where there were less supporters but lovely landscapes to enjoy.  We crossed North across the river over one of the bridges (not sure which one!) and then back to the city for yet another supporter moment.  We then repeated this loop before branching off up a sneaky hill to the finish line which was at Victoria Park – and which was a little cruel.

Dan and I finished together in 1.57 and we had our moment of fame as they called us out as we crossed the finish line – as “Helen and Daniel Spain from Ramsgate” and then commented how far we had travelled for the event.  I was buzzing!  Then there was a bit of a walk to collect T shirts and medals and smiles all round!

All in all – a huge success.  A great event with a flat course for runners and great for spectators with multiple cheering opportunities. My only complaints being the small hill at the end and the water is provided in cups along the route which never works for me.  So my advice is to take a bottle.  Otherwise, I would highly recommend it and I am definitely going to run it again.

A big well done to Helen and Dan for running so well and a big thanks to Helen for the race report.